How inconsistent project pricing could be costing your business

The job costing process can sometimes be a complete lottery.

It's not uncommon to end up with 10 completely different quotes for the same scope of work.

I was recently speaking with one of our clients; a director at an agency, who recalled an issue which turned out to be pivotal in their decision to get CMAP.

The lessons they'd learnt along the way are really worth sharing:

This agency had quoted one of their existing clients £40,000 to complete a project. All sounds normal, right?

The only problem was that they'd had identical work completed for £25,000; not just once, but twice previously.

That’s nearly half price - so you can imagine the client was a little more than miffed as to why they were quoted almost double the amount they expected.

It turned out that the £40,000 quote wasn’t a screw-up, it was accurate for the scope of work.

Unfortunately, the mistake was only discovered once the poor account manager  was left facing an angry client (despite doing their job properly).

Without any centralised processes or defined structures to work from, people do things their own way. There is no consistency in pricing.

This whole story is a typical consequence of that scenario.

It's why the two fees turned out to be wildly different from one another: the account manager quoting the larger fee had simply calculated the correct fee based on a method he'd picked up working elsewhere.

As a result, the company had to make a decision: either to continue undercutting themselves or consider losing the client altogether.

More on this topic: the 5 step plan for improving project profitability

With CMAP, this kind of mistake just doesn’t happen...

There are two main reasons for this:

Staff select fees from a set of centralised, predefined templates. Which ensures rates stay current without becoming a free-for-all; centralising control and improving the consistency of pricing whilst removing a lot of manual work from the process.

With CMAP, the financial performance of projects isn't just an after thought.

Instead, issues with project profitability are highlighted as they happen via live reporting.

This puts users in a better position to:

b) ensure future pricing is accurate, and

c) determine if certain clients are worth dropping altogether.

All of this means that service-based companies stand a better chance of learning from the issues they encounter & can adapt accordingly. 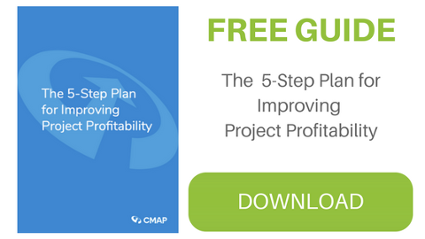 Subscribe to our blog for more insights delivered straight to your inbox:

How To Stop Over Delivering - 3 Steps To Increase Project Profits.
Phil Smith | February 3, 2020

The Evil Twins That Are Eating Your Profits
Dave Graham | September 23, 2019